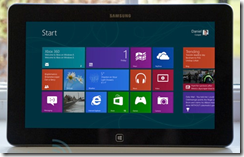 So why Windows RT? I still think the tablet is the middle-form factor…not the main form factor. For users who only need the web and apps…battery life (not storage…not processing power) are paramount. And today you only get that with ARM. Today it seems lots of my other developers think people care about desktop apps. But people supposedly cared about Win16 apps once too. I don't think it will matter soon…especially on smaller tablets.

I hear a lot of people on Twitter and at meet-ups talk about how Intel's new round of processors will close the gap. No they won't. Period. Scott Hanselman got to play with an Intel Haswell machine and his experience seems to validate what I've believed. Intel has failed to improve battery performance for a long time now. I won't hold my breath and wait for them to compete with ARM. For me Windows RT is a solution for when battery life is more important than power. Today, I can watch 10+ hours of video on my Surface RT and that's what I need it for. I don't need Windows RT to run Visual Studio or Card File or even WoW. I need it for those times when I need quick access to online resources or offline experiences like casual gaming or media.

I like to think I am both a fan and a critic of Microsoft. I hope the new Windows management does the right thing and realize that this is still the first quarter. Throwing hail marys aren't helping anyone. I don't think it's too late…but they need to do something they're not good at…trade profits for market share. It worked for the Xbox…it can work here too (and releasing an Xbox Gaming Tablet wouldn't hurt either).