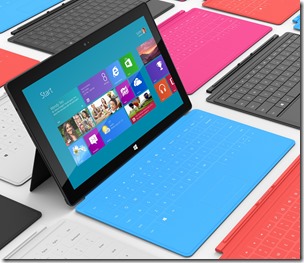 I am headed to Build later this month and am excited by both the Surface tablet and what the PC makers are going to show us in Windows 8 devices. But ahead of that show there have been a lot of reveals by the likes of HP, Dell, Lenovo and ASUS.

I am perplexed by these early reveals by the PC makers. On the whole, these companies built Windows PC’s in the Slate era (when Microsoft was pushing Windows Tablet Edition). Many of these new devices feel like throwbacks to the Pen Slates they built in years gone by and that’s unfortunate. Even if they don’t look like Slates, they look like ultrabooks with touch screens. Convertibles and such are interesting for the minority but not for the majority of users IMO.

There are two types of these revealed devices:

The Laptops with Touch are a good idea. These 11-17" screen laptops that add touch to them are actually a good idea. The Sony 17" one I find interesting…but I am a computer guy…not a consumer.

On the Tablet side, all the ones I’ve seen (mostly WinRT devices, not full Win8) are generic 10-11" tablets. They seem to be going directly after the iPad but they can’t win there. At least Sony has tried to differentiate with a 20" tablet (not a laptop).

And the pricing is completely out of whack. If they are trying to compete with the iPad, they are overpricing these devices (like they did with the original Windows Tablets). The entry level iPad 3 (or whatever they want to call it) is $499. Most of the tablets I’ve seen are $799 up to $1599. Not only is it hard to compete with the iPad on the sexy scale, but overpricing these devices just makes the sales pitch impossible.

It wasn’t that long ago that Microsoft (et al.) and Apple were in the reverse position. Apple devices were priced at a premium (for high quality hardware) and Microsoft ate up the lower end that enterprises and consumers liked. It feels as though the PC makers are oblivious to this fact. If you are going to sell an iPad competitor, how do you justify a pricing premium?  I don’t get this at all.

The Problem with Playing Catch-up

My frustration with all of these iPad-like devices coming from Microsoft and the PC makers is that they’re competing with a long-won market. They can make a dent, but they are differentiating enough.

If rumors are correct (they rarely are), Apple will be unveiling a 7-8" iPad on October 23rd…a week before people can touch the Surface (and the other devices). Microsoft will lose the mindshare again. This is exacerbated by the fact that Microsoft been so coy on pricing of the Surface. The Surface tablet is very sexy and I think it will sell well enough…but it could sell really well if priced right. If it’s $499, that’s ok…if it’s $300…I think it’d be awesome. Maybe $300 bare, and $450 with keyboard and lots of memory?

What WinRT is Missing…

To me, a real problem is that people are moving away from big tablets at a time when Microsoft and the PC makers think they can make a compelling big tablet. Most everyone I talk with that owns a 7-8" tablet love it…and I mean really love it. It’s a perfect size for most of us. The Kindle Fire and the Nexus 7 proved that. Those devices sold a ton and as of this writing there isn’t a single 7" WinRT device announced. None…nada…zero. This is a market that I wish Microsoft would aggressively jump into. I was hoping the relationship with Barnes and Noble was that jump but it never materialized. I doubt it will.