Master-Detail in ASP.NET 2.0 is Pretty Cool

This new property (*not* event), allows you to wire up clientside code to be executed before the server-side onclick is handled.  In the old days we had to do this manually.  For example, this is how you would hook up a simple confirmation dialog:

This allows you to cancel the server-side event if the user says nope!  Cool!

ASP.NET 2.0: How SqlProfileProvider Stores its Data...

This probably isn't entirely correct since I am just looking at the output (e.g. the database rows) to determine this.  For each object in profile (i.e. Users), there is a single row in the aspnet_Profile table.  This table is made up like so:

The three middle columns are used to store the properties and their values.  PropertyNames stores a list of properties with hints on how to retrieve it from the String or Binary column.  For example:

Each section of this string is the metadata about the property:

Why are ASP.NET 2.0 Projects so different from regular projects...

I am working on a portal project with ASP.NET 2.0 and I am loving it.  Lots of stuff is in the box that I need.  The project is using VB.NET so I wanted to make sure that everything was Option Explcit On and Option Strict On...but since it is a Web Application, the normal property pages are nowhere to be found (unless I am missing it).  If I create any other project type (I think), I can look at the project property pages and see the Compile tab: 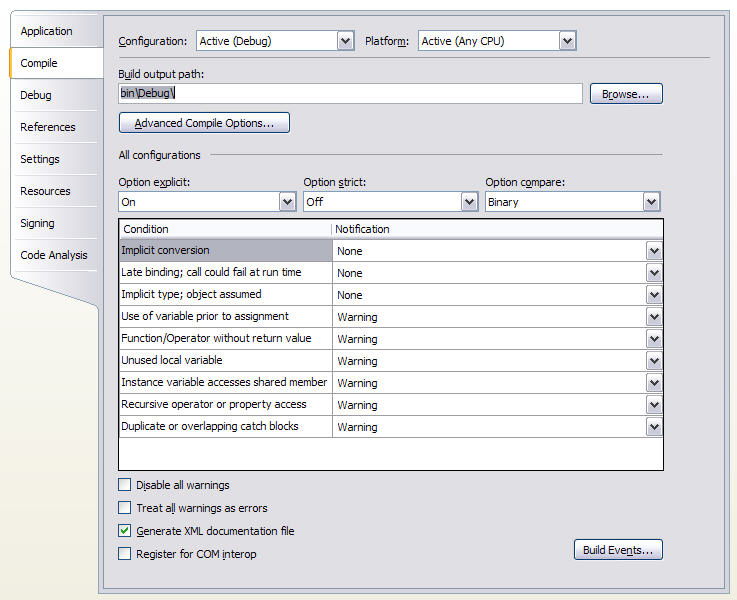 Why are web apps treated so differently these days?  Can anyone explain how I missed this?

I've been digging deep in to ASP.NET 2.0 the last couple weeks and I have been pleasantly surprised by a number of nice changes that probably didn't make the new features lists:

In addition, I was surprised by the intuitive forms authentication controls.  I was using the PasswordReminder control and wanted to capture the reminder and change the password to reset the password instead of remind them of their password since we were just storing the hashes.  But after digging in deep, I found out that since I setup the personalization to store as hashes, it was resetting the password.

Of particular interest is the DataSetDataSource object which is being postponed.  Though you can use the ObjectDataSource to bind to a Typed DataSet so it's not that much of a death-knell.  Check it out...

The Death of Inherited Typed DataSets?

I've spent most of the last week in Redmond seeing some new stuff and meeting up with old friends.  While I was here I scheduled some time to sit down with Steve Lasker of the Visual Basic/Visual Studio Team.  His team in in charge of the Typed DataSet in Whidbey.

I met with him to discuss the inheritability of Typed DataSets for business logic.  If you've been reading much of what I have written in the last three years, you probably know how long I've advocated the use of Typed DataSets as a replacement for Business Objects.  Alas, I've finally been convinced by Steve that they never intended Typed DataSets to be inherited.

In our discussion, he suggested using Typed DataSets and registering for events to do simple business logic is where they envisioned to be the limit of that use.  They seem to be convinced that the DataSet can be too heavy for certain situations.  They've spent a lot of time in the Whidbey bits to make object binding work much better than in the 1.x Framework.

DataAdapters and Component Surfaces (or why I love using the toolset)

I always forget this blog this, but when I am doing a database project using Typed DataSets, I almost always use a Component Surface to build my DataAdapters interactively.  For example:

Here I add a component to my project:

Looks like MS is going after the 'hobbyist' with their new “Express” line of development products.  Wonder if this will really stem the MySQL tide or not.  Perhaps the SQL Server Express edition will be a better solution than MSDE.

How could I have missed it?

I hope I am not the only one who missed the magic of CTRL-SHIFT-V. I have bungled about with copy-paste in the editor so many times...I accidently hit CTRL-C instead of CTRL-V and copy an empty line instead of pasting my code...Arg! Now I know to just hit CTRL-SHIFT-V and pick my lost copy from the clipboard ring.

Now its got me wondering what else I have missed. If you have a favorite hidden treasure, could you e-mail at shawn@wildermuth.com and I will post them in an upcoming rant.

After complaining to MS guys for over a year, it seems that they've finally opened up their Visual Studio Integration Program (VSIP). For those of use that have wanted to dig in deeper into VS.NET and fix some of the annoyances, this is great news.

It looks like they've tiered the support (here). With the new Affiliate level support, it allows us shareware/free developers to join the program and get newsgroup level support for free. Thank you Microsoft. This is definitely the right direction.