End of the Year Review 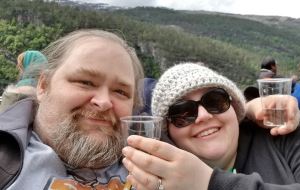 With the New Year coming, I thought I'd look back at the last year in my life. Warning this is going to be technical and personal, that way I can turn 50% of the people off with every sentence...just a different set of people with every paragraph ; )

I've had a tough few years, but overall this has been a good year in the Wildermuth house (removing entirely our Political climate which I won't talk about here). It's not been easy, but it's been good. That's the way it usually is for me.

One of my favorite lines from music is "Every five years or so I look back on my life, and I have a good laugh." 1 That's how I have felt most of my life. This year is no different. One constant is my life is that I'm constantly trying to learn something new, whether that be technology or anything else. Here are some categories of my life that I'm looking back at:

I've been pretty entrenched in web development for while now. I'm still spending most of my days using ASP.NET Core and associated client-side technologies. One big shift for me has been in looking past Angular 2 and React for client-side web dev. My desire to back away from the complexities of the new client-side build systems has had me look at Vue.js in a big way and even to look further back at things like Knockout and plain-old jQuery. While I think building monolithic SPAs still have a place, I feel (like most things technical) that it's been easy to try and hammer in the screw for solutions that don't need a single, giant app.

I've also embraced the fact that as a developer, the operating system is becoming less interesting. While I've spent my fair share working with XAML (WPF and Silverlight), I think creating single-OS solutions are becoming less interesting. I do spend most of my time on the web. So things like UWP aren't on my radar at all. As for mobile, I'm leaning on Xamarin more and more, but mostly for small personal projects, nothing i'd bother putting in an app store. I think that Apps are waning, but not sure why.

Lastly, I've noticed that there are more fascinating things happening development than I can remember happening in many years. That also implies that I need to spend more time learning next year.

Software Development: Goals for Next Year

Learn a lot more about Kubernetes

Get comfortable writing > ES5 in the browser (trying to avoid transpilers)

I'm turning 49 next year and that's not just a square, it's a big number. I'm not immune to thinking about my future. While my health has been much worse in prior years, this year hasn't been too bad. I'm still well over a healthy weight but losing 30 lbs in the last quarter has me energized and motivated to continue the exercise and food plan that I'm doing.

I had trouble with Kidney stones, but came off some of my heart arrhythmia medicines this year. Stress is no joke and working on lowering my overall anxiety has been a work in progress. I've started doing meditation and that's proving to be providing me with concrete benefits. I can recommend the book 10% Happier if you're interested in how it can help you too (meditation without the mystical or religious overtones).

Health: Goals for Next Year

Continue my food plan which includes planning my food a day-ahead every day.

Increasing my exercise from 2 days a week to 5.

I am incredibly lucky to have found the woman of my dreams in my wife Resa. Luck is only part of it, as with any marriage, it's something we have to work on. After spending a year on the road when we got married and dealing with broken bones (for both of us), we've had a pretty healthy year. I feel like we're hitting our stride with settling into living in one place. We just crossed the two year anniversary of buying our house. And this is our life-house. We don't expect to ever move again. I told you I was lucky.

My extended family hasn't had it so easy. Just last night I found out my Grandmother passed away. That's on top of a large number of death's in the family the last three years including losing my mother. To pad the bill, my sister had a serious auto accident last year which left her unable to work and surrounded by the memories of our mother. Something had to change. We decided to help my sister and nephew to move to Atlanta so they can get a clean start. My real motivation for this is to finally live near my family. I've been an absent brother, son, and uncle for far too long. Luckily Resa and I both agreed about this and made it happen. This Christmas has been pretty special having us all together.

Family: Goals for Next Year

Spend more time with the family instead of always working

Learn how to be a friend not an uncle to my 24 year old nephew. Luckily he's a Star Wars nerd like me

Find time for Resa and I to have more time together

I've spent much of this year working on the film. Learning how to make a film has been very challenging and I often have felt over my head. But that's often when I feel like I'm really learning. I've spent a lot of the time on the filming trying to learn every aspect of the whole process. My big success this year was hiring a great cinematographer. Admitting that I am not good at everything is difficult. But finally realizing that nothing gets made in a vacuum. Finding great, smart people who disagree with you is the key to a great project. I hope this is true for the film as well.

I've had some success with the film today. I launched the teaser and the Kickstarter video. I originally hired a firm to help me edit the Kickstarter video, but after being disappointed with the result, my cinematographer, Lou, gave me the confidence to do it ourselves and I'm really proud of it.

The Film: Goals for Next Year

Get Sponsors for the post-production

While I'm at it, I'd like to share some of my favorite movies released this year (in no particular order). While some really amazing movies are probably missing from this, these are my favorite movies that I actually got to see. I still have most of the Oscar contenders to try and see next month so don't assume if I've skipped a movie, that I didn't like it:

Like Movies, I still enjoy video games at my mature age. This year has been weird in video games in that I've had trouble finding games that really grabbed me and made me want to keep playing. Truth be known, I've spent more time on Fallout 4 and Skyrim this year than probably any recent release. Some of this is because games that I would think I'd try were hamstrung from bad ideas like retail exclusives (i.e. Assassin's Creed: Origins) or loot boxes/micro-transactions (i.e. Middle-earth: Shadow of War).

The biggest change in games this year has to be the Switch. I'm not a Nintendo guy. The family friendly company usually wasn't gritty enough for me. I know that my lack of interest in Pokemon and the fact that I've barely played any Zelda games might mar my geek-cred, but that's the fact. But after seeing some friends with the Switch (and the ability to play console games on a plane), I bought one and haven't regretted it at all.

This is what I've been playing this year:

One thing you might notice is that there is no XBox there. That's true. It's been gathering dust mostly. Not sure why, I play most games on my PC with an XBox controller. Just became easier to actually play on my laptop instead of the TV.

Thanks for putting up with a long post, but I wanted to put together my thoughts before the new year hits me in the face.