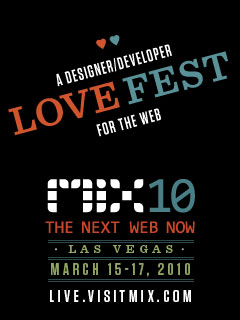 MIX 10 is over and lots of blogs are listing all the interesting links and discussions that happened at MIX. I don’t want to duplicate that, but instead thought i’d tell what I think are the big stories.

While the Windows Phone 7 Series (hrmph, why must you name things like this Microsoft?) had it coming out party before MIX but this is where the developer story became real.

I believe that the Phone is a big deal because (unlike Android which I have and like), the phone is not a ‘me too’ release. The phone was designed with a different use case.  It gets away from the purely “App” idea (as in some apps will just integrated with the phone’s collections like the NetFlix app). And of course the development story is the best in the mobile space. VS based development is likely to be the easiest to build code for a phone.

But it all depends on how they deliver it. You’ll see a lot more here about my experience with the phone coming soon.

With the release of the RC of Silverlight 4 (and the promise of RTM by next month), we’re all now in Silverlight 4 land. The new Blend 4 Beta has some nifty tricks up its sleeve so take a look at that as well.

I was glad to see that OData got its coming out party at MIX too. I was suprised by the reaction to it.  Some people loved the idea of a common format/query for data. But the demo that Doug Purdy did that got Twitter fluttering was that you could craft LINQ queries over OData sources.  This surprised me because I’ve been teaching people for three years now that LINQ over Data Services (e.g. OData) is cool.  Guess I haven’t done my job well enough yet ;)

I did two talks and now they’re available as videos: