I will be returning to my 10 part series on Modern Web Development soon, but I have a quickie post that hopefully will help some of you.

In my main project, I am using Ninject to inject dependencies into Controllers. This works really well and I won’t belabor how that works here (see project here for how to get via Nuget and how-tos).

For me, Dependency Injection (or IoC) is a commodity. Ninject does a great job so I use. I could be using SM, Unity or a host of other DI/IoC solutions and it probably wouldn’t matter too much. So, this is to just short circuit the “Why didn’t you use my favorite IoC” questions.

In a web project I am working on, Ninject is bootstrapped to provide controllers with resources (usually in the constructor) via Ninject.MVC Nuget package. Inside the Bootstrapper for Ninject, it sets Ninject as the DependencyResolver so that ASP.NET MVC’s Controller factory will know how to resolve missing dependencies. This works great and has been for some time.

Enter WebAPI Beta (that was shipped with MVC4 Beta) that I am using to create a publically available API. Everything was great until I created an API Controller that required dependencies (services) like so:

Creating this controller failed because the Web API stack and the MVC stack are completely separate. This is confusing to some as they were announced together, but a prevailing theme of this stack was to be completely independent. This means it doesn’t have access to the DependencyResolver from System.Web.Mvc.

To address this, the Web API stack has a way to set the configuration’s resolver:

The SetResolver method takes one of three things:

So after complaining on Twitter, I decided to do this as it should work:

This works, but I felt dirty.

Brad Wilson (@bradwilson) is on the WebAPI team and he scoffed (correctly) at my suggestion that it should just support duck typing of the GetService, GetServices methods. He suggested I used the third overload where it is using the CommonServiceLocator adapter. 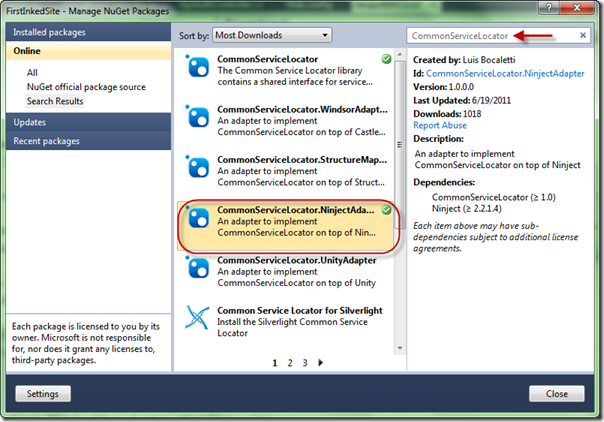 Once I had this installed, I could wire this up directly in the Ninject bootstrapper:

Hopefully this will be a case of “It’s easy once you know how!”.