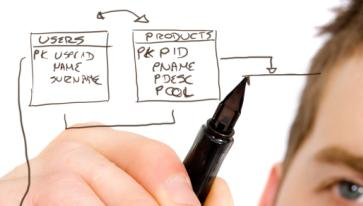 To many developers this may seem odd. I talk with many staunch ALT.NET guys, and the DDD philosophy seems to be that data is a top-down or at worse, bottom up design problem. The issue here is that there is an assumption that just simply not true that data design is part of most software development projects. The reality based on my experience as well as the experience of talking with developers in the community is that many projects (though its hard to exactly quantify what percentage) begin with existing data. This is especially true in the enterprise where data exists in many forms from new databases, legacy servers (e.g. mainframes) or even flat files and XML. It is the rare project that is new code against all new data.

For new projects, creating a new database schema that at least in some part mimics the design of a project makes sense. The problem is that over time the data must evolve. I think the reality is that depending on the organization this can be very different. There are some opinions that I think impact the maturation of a data model:

Now I am not suggesting that we need to dumb down designs to deal with the nature of data, but understand that the IT infrastructure of deployed products is a lot more fluid than developers would like. For me it is, “Hope for the best and plan for the worst.” This means understand that pushing a design philosophy that can help developers get their job done in a more efficient way as well as create better software is what we all are trying to do, but there are no black and white lines drawn here. No *rule* applies in all situations. I laud the ALT.NET guys for trying to inject better skills and tools into the process, I just rail against the ferocity of zealotry that comes in some of the message. When enterprise developers hear this, they just tune it out instead of taking what helps them and leaving the rest.