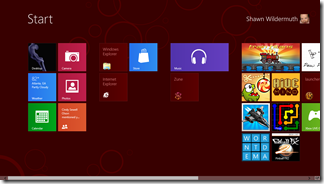 Almost One Week with Windows 8

NOTE: is that I am using Windows 8 on a non-touch laptop. This means I want to test it as a replacement for Windows 7 on my development machine. This is a particularly important test for the Operating System for me. I’ve used it on a Tablet for several months now and I really like it. The Samsung Tablet that we were given at Build is a good machine to see how real tablets will be. The lack of apps and battery life make it an approximation of real tablet use for me, otherwise I’d use it a *lot* more!

When I set up the Tablet for Windows 8, I just used my LiveID so that I could get the full integrated experience that consumers would get. But since I use domain authentication for my laptop, I was worried about how the experience would be. Luckily, I was able to login easily with a domain account like I figured. But what I didn’t realize was that if I link my domain account with a LiveID, I could do pin and picture password. I’ve been told that authenticating with an Exchange server breaks this, but for me it’s working grand! Pin login FTW!

Using the New Start Screen with a keyboard and mouse has gotten a lot of attention as many people don’t seem to like it. For me it was a bit of getting used to the new Start “menu”. While I can’t grab and move the start menu, the scroll wheel moves me through the Start Screen just fine. A couple of hints for those getting used to it: 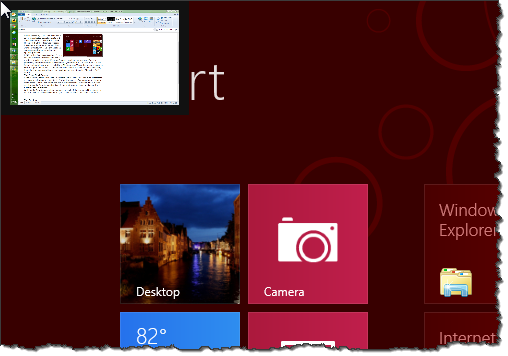 If you move to the upper right corner you get a preview of the charms:

You can also move to the right side to get the full charm experience: 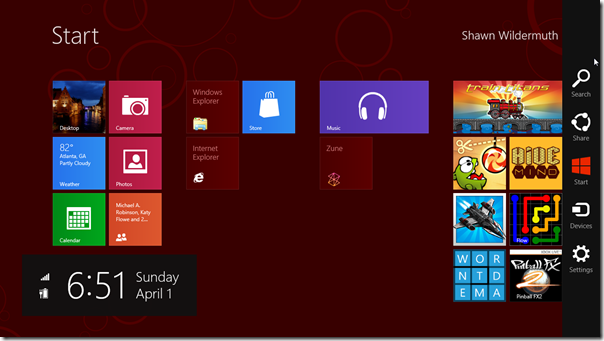 Another important feature is to quickly navigate around your Start Screen as you get more and more tiles is to use semantic zoom. On touch this is done with a pinch move, but with the mouse you can get this by either clicking on the bottom right, or I find it more natural to just hold the Control key while I use the mouse wheel: 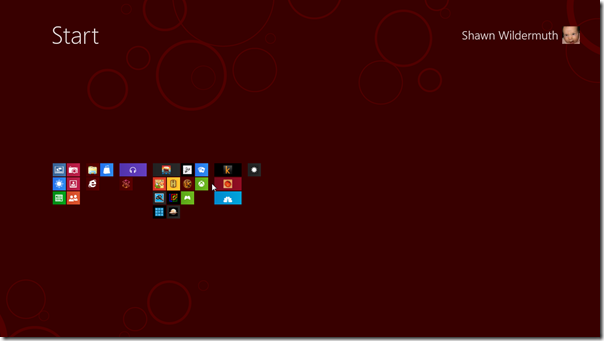 Working with the Start Screen

For me the Start Screen is just a big Start Menu. I can simply right-click on an icon to select it, then I can either remove or change the icon like so: 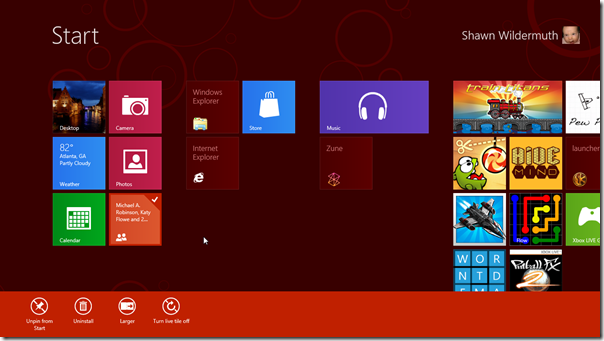 Like the Start Menu, the Start Screen can be accessed quickly with Ctrl-Esc. So my muscle memory of hitting Ctrl-Esc and typing to search for apps works exactly like I expected. In fact, the search is across the machine so I can simply change the search area (e.g. Settings, Documents, Apps) quickly. The Tab key and arrows work as I expected them to: 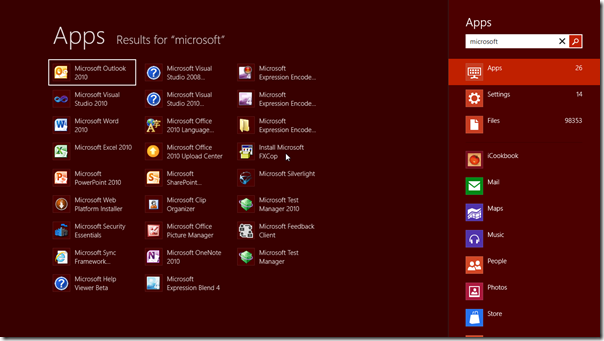 If you are running several Metro apps (including the Desktop), you can also access the apps via the left side like the life-side swipe that works via touch. For example, if you have more than one Metro app running, when you show the last app running, you can move your mouse down (staying on the left side of the screen) to show all the metro apps running: 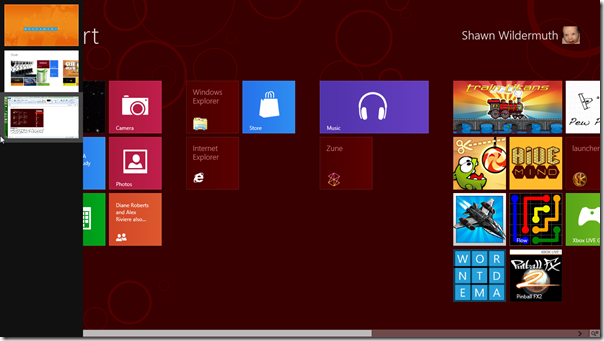 With access to these apps, you can drag them and create split screens like on the tablet.  Finally, you can also close these apps by grabbing the top of the screen and pulling them down: 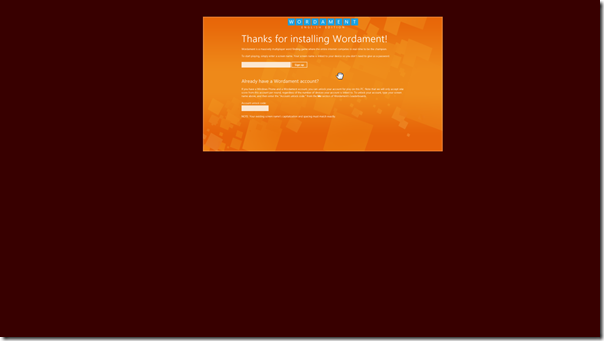 The app will get small and show the hand-hold icon.  Drag to the bottom of the screen and it’s closed.

One pet peeve of mine is that I have to “run” the Desktop app to get to the desktop. But since this only happens on a reboot, this won’t happen much so I can live with it. The integration of the Desktop feels pretty seamless. It will take a little time to get used to, but luckily most of the things you expect to work on the desktop just do. For example, Alt-Tab will let you navigate through all running apps, metro and desktop (Metro Apps are marked with arrows):

This helps it feel less like two separate worlds. When working on the desktop, you can get to the Metro’ness with the corners too. Upper-left corner for recent Metro Apps, upper right for Charms and (only on the desktop) lower-left for Start Screen: 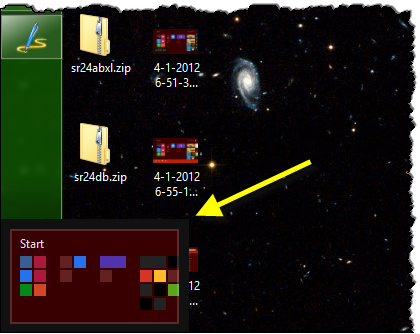 I tend still spend most of my time on the Desktop (no surprises there) but being able to pin a Metro app to the left or right has been useful…waiting for a Twitter/FB Metro app to really use this: 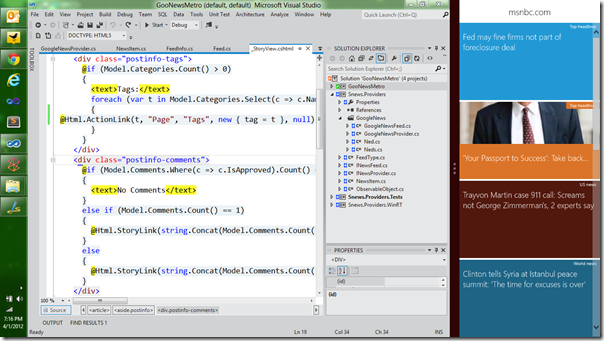 For me the real test comes when I want to develop on a Windows 8 machine. This has been really good. Visual Studio 2010 and 2011 living side-by-side work well (I notice some additionally crash-y ness out of 2010 but not sure if it’s Win8 or the side-by-side installations). But I am running all my main tools without a problem:

No problems with existing development at all. This was a real relief.

One of the reasons I wanted to move to Windows 8 was to be able to develop Metro-Style applications easier. Remoting into the Build Tablet works but it’s not a very powerful machine. Developing WinRT/Metro apps on a real laptop has been mostly a joy. I use the local machine to develop the app and also have used the remote debugger to debug directly on the tablet without any problems.

While I really like the experience and don’t want to go back to Windows 7 anytime soon, I do have a couple of odd experiences I thought I’d document:

Overall, I am loving the OS but not quite ready to anoint it for dev’s who don’t like Beta quality software. I am not going back personally.

Have you installed it? What do you think?