I admit it, I don’t know if that last word in the title is real, but anyway. I’ve used a Windows Phone since betas of Windows Phone 7. Like some of you I have the question of whether to believe the new Microsoft’s lukewarm support for the platform. Will Win10 be the savior of the platform or final coffin nail? I don’t have an answer to that.

I like to think that all that time has given me perspective, but I am not sure that’s true. I liken myself to a detached observer, but the reality is that I own a Windows Phone, a Windows Laptop, an Xbox One (and 360 before it), a Microsoft Band, and I even have a Spot Watch somewhere in a box. Does that make me a fanboy? I hope not, but certainly not a detached observer with a honest perspective.

Where does that leave me? That’s for my readers to judge. I am sure it’s somewhere in the middle but certainly leaning towards being a Microsoft fanboy.

When the recent information about the 950/950XL came out, I was interested, but not excited. The problem is that I wasn’t excited. Iris Scanner? Meh. Continuum? Cool feature but I don’t see myself using it. I have Windows 10 on a 640 that I got to be a tethering phone for the world trip. I don’t see the features that make it compelling. It’s not that different from Windows Phone 8.1. Sure there are niceties (searchable settings, larger screen support), but I don’t quite care.

For me the biggest reason to use Windows Phone at this point is that I like the cameras. I’ve tried the Sony and Samsung phone cameras and even at 16MP they aren’t as good as the 1520’s 20MP camera (nothing to say the 1020’s). I haven’t had much time with iOSs but the low MP means that I can’t zoom on anything and have to bring my handheld camera out everytime I want to zoom. That’s not good.

I could just jump to Android or iOS. I could. I had android phones before I had Windows Phone so I know what the ecosystem used to be but I fear about the lack of security (both from app authors and from Google itself). The file system seems to be rife with information gathering. I also find that Android performance degrades over time. I am just disinterested in Android.

What about iOS? I have a iPad Mini that was graciously gifted me. It’s a great device to reading Kindle (as the Windows 8.1 and Windows phone apps for Kindle are missing key features and stability), but I don’t use it for much more. I don’t care for the OS and am put off by the uninstallability of stock apps. I guess everyone has a folder in iOS called “Apple Junk”. I just don’t see myself enjoying it.

That leaves me in the ‘wait and see’ place. The 950XL might be perfect when it actually appears in Sept/Oct and I might do that, but if a great Android phone comes out, I could see jumping there very reluctantly. Is there a fourth player I don’t know about?

I use a 1520 for my day-to-day phone. It’s a big phone (probably a tad too big) but as a forty-something, the big screen helps me not have to put on my glasses for everything. At 6” it makes me not need a 8” tablet for much. I use it for video and book reading routinely. Though I prefer the 10” size for video playing so I wanted to get one.

I had purchased a Lenovo Tab 2 for tablet use (mostly just for plane flights), but it is a piece of crap. Lenovo is dead to me now. No sound and they couldn’t fix it. Battery was awful and didn’t have a recovery drive so I bricked it on a Win10 installation.

Back in April, I wanted a Surface 3 for this purpose. I liked that they were no longer an RT device and the Pen support seemed interesting. I am not a fan of the Surface Pros simply because they aren’t enough of a tablet for table usage and they are too small for a laptop. I don’t see the allure, but many of my friends love them. Go figure.

Ready to pull the trigger I took stock of the situation with the Surface 3: I wanted the more memory so it could do more than just video since the 2GB in the stock unit is barely enough IMO. I also wanted the pen and a keyboard. While I didn’t think I’d use the keyboard much, it seemed silly to not get one at all. That left me here: 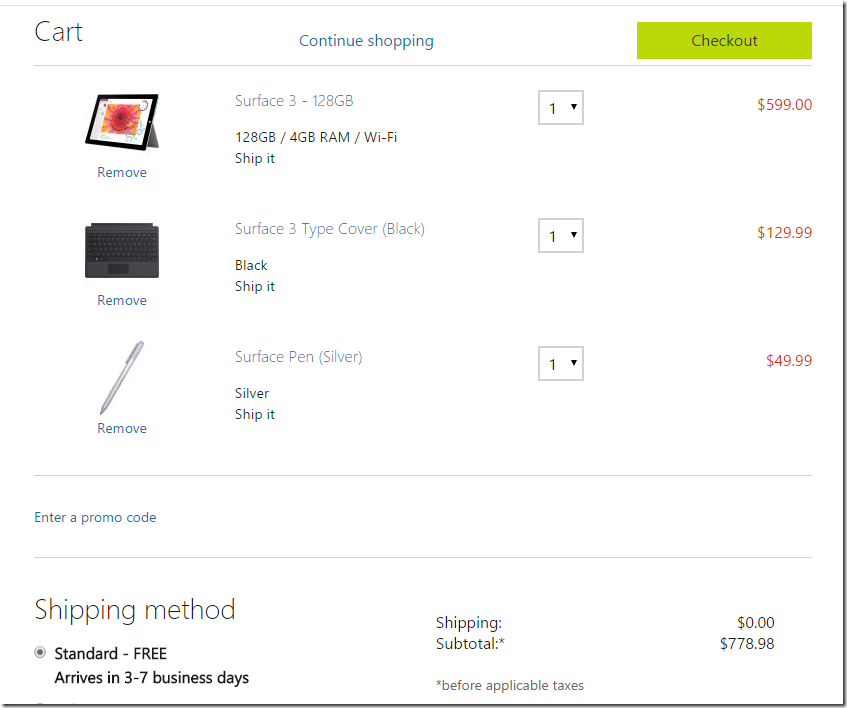 Really? $800 for a tablet with basic functionality? I didn’t balk at the $600 for the tablet, that’s close to Samsung and Apple prices, but the idea of premium pricing of the accessories made me delete the cart. I know what Microsoft is trying to do, but charging extra for what should be in the box is ridiculous. The pen and the keyboard should be in the box.

So what Tablet did I end up with? None. The size between my 15” laptop and 6” laptop means its good enough. I still have my iPad too, but don’t even know if it is charged.

I am a Microsoft MVP. I’ve been working with Microsoft products for long enough to have a real amount of loyalty. The fact that the New Microsoft is treating Android and iOS as first class platforms is a good thing for everyone, but it also removes the need to stay in the ecosystem. Don’t get me wrong, I am enough of an Apple-hater to never go MacBook, but I could see myself with Android and iOS devices for other tasks. My patience is just wearing thin.

Honestly having to hear Chris Sells wax poetically about his Nexus 6 and Jon Flanders profess his unending adoration for everything Apple is hard enough ; )