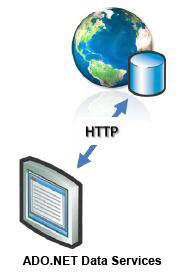 UPDATE: I had the PUT/POST reversed.  It reads correctly now.  (Thanks to commenter Rob for pointing it out).

Essentially it provides a way to use a data model across the firewall. It works by exposing IQueryable endpoints through a URI-based syntax allowing developers control over how the data is retrieved through:

Before you can consume a Data Service in Silverlight, you will need to create a model and service.  See Guy Burstein’s walkthrough of creating the service here:

You *can* use LINQ to SQL as your data model but currently it does not have support for updating via ADO.NET Data Services so if you need to read and write data, you should start with an Entity Framework data model.

In Silverlight 2 Beta 2, ADO.NET Data Services is composed of an in-memory library allows asynchronous LINQ queries that are translated into the URI syntax automatically. Before you can get started you will need a a client-side version of the Data Context object and data contract classes for the entities in your data model. To do this, simply use the DataSvcUtil.exe tool located in the *C:\Windows\Microsoft.NET\Framework\v3.5* directory. Typically you would call it by specifying the URI of the service, the name of the class file to create and what language to use:

Normally, you could execute the query directly by calling something like ToList() against the query.  Since that operation would cause a synchronous web request to happen across the network, that isn’t supported in Silverlight 2 Beta 2.  In fact, if you try you will simply get a NotImplemented exception. In order to execute these queries, you will need to cast the query into a DataServiceQuery.  The DataServiceQuery allows you to call BeginExecute to start an asynchronous query as seen below: