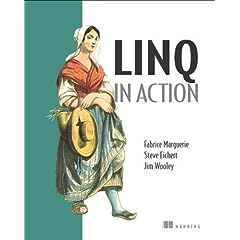 I’ve spent much of the last couple of weeks trying to strengthen my LINQ knowledge. A friend of mine is one of the authors of a LINQ book so I figured it was a good match to dig deeper.

The book covers a lot of topics that emcompass LINQ including LINQ basics, but also LINQ to SQL, LINQ to XML. I like that it starts out with a discussion of the problem and doesn’t dive directly into the solution. In addition, I think it teaches the technology without resorting to starting with database applications as the example. Anyone who has heard me talk about LINQ knows that I can’t stand that LINQ to SQL is the wrong way to teach it to new people…they didn’t fall into that trap.

In addition, I really like that there are lots of good examples and a great index.  There was never an example I was looking for that the index didn’t help me find. That’s becoming rarer in books. I really liked their coverage of LINQ from both the consumer of LINQ and the provider of LINQ. Their discussion of the LINQ to Amazon provider provided quite a lot of good insight into how the inner workings of LINQ are put together.