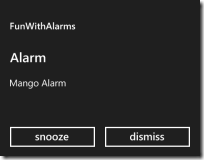 As many Windows Phone developers have noticed, Mango (e.g Windows Phone SDK 7.1) supports background processing through something called Agents. While Agents are certainly a welcome addition, I am exceptionally impressed in the fact that Mango also supports a bunch of features to avoid having to have background processing agents. In this post, I’ll show you one of these: Alarms.

The general idea of Alarms is being able to create application specific alarms (not just using the Alarm clock app). Alarms do come with a couple of small caveats:

To compliment alarms, the phone also supports Reminders which can overcome some of these limitations, but I’ll show them in a future post.

With that in mind, you can create your own alarms and even specify the type of alarm sound that is played. To do this, create an instance of the Alarm class (in the System.Phone.Scheduler namespace):

Each alarm must be named (unique, per application) so you can look it up later (if you want to disable it or remove it). BeginTime when the alarm should fire. **Content **is the message shown in the UI. Finally, Sound allows you to specify a sound file (mp3, wma or wav) to be played. This file must be delivered with your .xap file (can’t be in isolated storage or via an Internet connection). While the **Title **property exists on the Alarm class (because of the base class), it will throw an exception if set to ensure that you don’t think the Title will be used.

Once you create the alarm, you can register it like so:

The ScheduledActionService is a class that is used to register reminders, alarms and agents. The Add method simply adds the alarm to the phone. The other methods of the service are also supported by the Alarms as well (e.g. **Find, Remove, Replace **and GetActions). There you go, you can now add your own alarms!