Windows Phone 8 - What do I think?

The big news for most users is the fact that Windows Phone 8 won’t work on current hardware. To me this is short-sighted as it seems to punish the only fans the platform has so far. This was especially relevant since I *just* received my Nokia 900 (after having a HTC HD7 for the last 15 months). The idea that this new piece of hardware was going to be out of date in only 4-6 months upset me. But let’s think about it in broader strokes that just me. Is this a good strategy overall?

Windows Phone 7.x has a small market share right now. That’s a fact that no one who cares about the phone likes to think about. So the number of users who will be affected by the easier path of not building support for older phones is still small. When I look at the Android ecosystem of users, the core geeks care about 2.2/2.3/ICS but most day-to-day users don’t. They care about features but they don’t seem to even know what version they have. That doesn’t make the decision a nice one, but it’s one that I think the phone can stomach…especially if Windows Phone 8 can actually penetrate the two behemoths of iPhone/Android market share. I don’t like it, but I understand it.

In my ivory tower, I’d love to see Nokia step up and offer a way to 800/900 users to get new phones in a way to create some goodwill and brand loyalty, but I am not holding my breath.

As to the new start screen I think it’s a good, but busy step forward. I still think real grouping (not necessarily folders) is needed. The idea of adding up to four icons across to prevent endless scrolling helps, but it’s sandbags on a broken dam.

I think the over-the-air updating is a big win too. Not just to avoid the nastiness of the Zune experience but also because Microsoft is really taking over for the upgrading of phones. The promise (though we’ve heard this story before) is that carriers won’t be able to block upgrades for 18 months minimum. Great news if you like updated OSs!

New features like multi-core, NFC are great but as a user, I just want a great phone experience. I think Windows Phone 8 brings us closer to competing but unless we can get the app mindshare, we’re always going to feel like 2nd class citizens in the phone world. It’s nice that MS is working to get apps like Draw Something and Words with Friends on the device, but by the time they do, the next big apps will be here. Getting market share to get the app builders to have to write for Windows Phone when they write their iOS and Android versions are what I really want as a user of the platform. That’s brings us to the developer story. 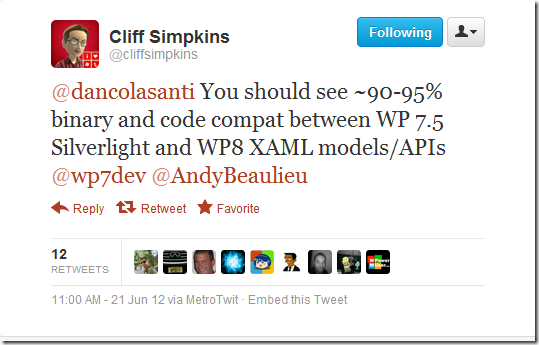 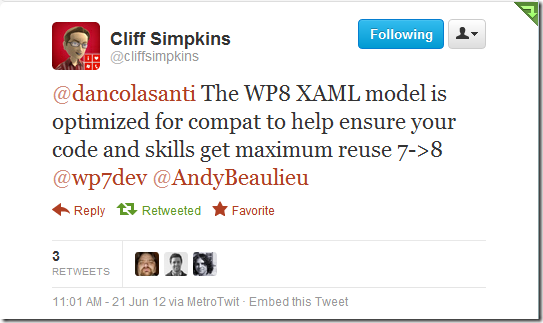 This tells me that skills you have now (or are getting now) to build great Windows Phone apps will carry over.

The new SDK is also going to support DirectX and C++/C native development. I think the importance of this is two fold (but I am 1/2 guessing):

They also talked about new features that fill in the capabilities to be somewhere between iOS and Android including:

These two are pretty huge in my opinion, but the full breadth of the new features will be more obvious when the SDK is unveiled later this summer (not dates yet). So in the big picture I think Windows Phone 8 represents a big win for Windows Phone developers (both current and future).

The real question is how much work it will be to maintain WP8 and WP7.x versions of apps. Since the old phones can’t be upgraded, you won’t have the “You must upgrade to 7.5 to get apps” story that happened earlier this year (and was a good decision in my opinion). If it’s a lot of work to maintain two versions of every app, this will be a big problem for dev’s (though Android dev’s are used to this).

Since the upgrading of existing phones isn’t supported, Microsoft is trying to mollify the existing users. The new start screen is the only feature they’re promising, but I think that it will have to be more than that to make people happy.

My real problem is that (unless I heard wrong) that 7.8 will ship 3 months after Windows Phone 8. I think they need to reverse the order if they are going to really make those users happy.

The dates are all in flux I believe. Some of the handset manufacturers are promising WP8 phones by late 4th quarter. If that’s the fact, then they are going to miss the holiday. That’s a big problem. And with the no-upgrade story, Windows Phone sales will slow down even more. This is a big missed opportunity. I think the get a Nokia 900 and we’ll get you a Nokia 950 phone (yeah, I made this phone up for an example, don’t go crazy) when they ship is one possibly but don’t hold your breath.

One rumor that many people are whispering is whether Microsoft will pull a Surface and release a phone too. I am mixed on this unless it’s clearly a win for a partner (e.g. Nokia). Because Microsoft has experience with tablets (they’ve been building them or reference designs a long time), but the phone would be easier to screw up. I just don’t see this happening, but who knows at this point. Microsoft has been surprising me all year.