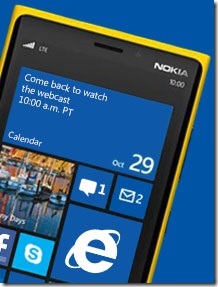 Today Microsoft is finally releasing the new Windows Phone 8 SDK. As I’ve been updating my Windows Phone book for this new incarnation of the device, I am excited that the SDK is finally going to be available for public consumption.

Even though the new phone has completely changed the underlying operation system to use the same WinRT sub-system that powers Windows 8, the basics of how to build apps on the phone is primarily the same. This means if you have experience building XAML-based projects, you should be right at home with Windows Phone 8.

A lot has been talked about the new Operating System and it’s new tile layout and other features. But what I want to explain are the new developer features that I am excited about (in no specific order):

The ability to use Visual Studio 2012 instead 2010 represents a big leap in productivity for me. It’s not just the new IDE and it’s own improvements, but the ability to use the built-in XAML designer (which is based on the Blend code) means that for many changes I don’t need to exit the IDE to modify my XAML. I still need to use Blend for advanced stuff like animations, rich styling and visual states but most of the basic layout works in the designer directly.

While prior to Windows Phone 8 users could launch your app by saying “Open {App Name}”, Voice Command support is extended to allow you to add your own verbs and nouns to the phone-wide voice command system. So when users long-hold the Windows key, you can now have them launch your app directly!

While NFC support on the phone will be useful to share playlists, photos and contact information by simply touching phones, this same support can be used by developers to enable all sorts of interesting applications.

The new SDK also unleashes support to use the TellMe voice recognition engine directly in your apps. Imagine being able to tweet out in the next version of Rowi without even typing!

Creating public apps is interesting, but new in the Windows Phone 8 SDK is the ability to create a store just for your organization. This allows more business applications to use the phone and limit who can have access to those apps to only employees. It includes other features like fast updates to those applications and revoking apps. It empowers enterprises to use Windows Phone as mobile platforms like never before.

In prior versions, getting debugging to work involved either using Zune or WPConnect to make work. In Windows Phone 8, plug it in and it works. No app, no nothing.

Finally, a new feature of the SDK allows apps to exist in the Camera app on the phone and let users launch the app directly from the camera. This allows different types of camera experiences like scanners, augmented reality and others. While you could use the camera to build these apps, integration directly into the Camera app makes them more discoverable and easier to launch for users.

These aren’t all the new features of the SDK, but represent a taste of what has me excited about developing apps for the phone. Go get the SDK and let me know what you’re building!