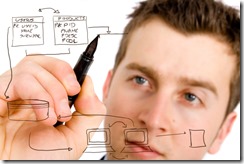 NOTE: This post has been updated for changes in Beta 7 and later.

Every web project needs some sort of data framework and ASP.NET 5 is no exception. Like it’s forbearers, ASP.NET 5 uses Entity Framework, but this version of the Entity Framework is different. It’s being re-engineered from the ground up just like the ASP.NET 5 stack.

In this, the third part of my ASP.NET 5 series, I’ll be talking about Entity Framework 7. While you can use older versions of EF or other storage mechanisms (NoSQL, Postgres, etc.), I think it’s an interesting exercise to see what the EF team is thinking in this evolving version of the framework.

First thing to understand is that EF7 isn’t done. It’s a work in progress. So much of the warts and pain points I discuss here will hopefully be gone by the time you’re actually using the framework in ASP.NET 5 projects.

To get started with Entity Framework 7, you need the reference. By default this is already there but for when you need to update to new versions, I thought I’d point it out where it is in the project.json file:

So now that we have the connection string, what is next?

Next, Entity Framework is added to the services collection by adding it like so:

Because I’m using this as my ASP.NET Identity context too, the configuration (in the **ConfigureServices **method of startup.cs) needs this context added too:

Because I created a repository class that does the real work of the site, I’ll need to configure that in the ConfigureService method too. In this case, it’s a simple adding of the interface and implementation class like any other dependency injection framework you’ve used before (i.e. Ninject, Unity, etc.):

This implies something that is important:

If you’re not using dependency injection yet, get used to it…you’ll be doing it in ASP.NET 5!

In the creation of the DbContext, we saw that the code is calling Database.EnsureCreated() to cause the database to be created. What isn’t obvious here is that it also calls Migrations. Migrations are used to build the schema of your entities. But we need the migration to exist. Because I started this project back in an early beta, I’ve had to delete the entire set of migrations (the code in the Migrations folder) and rebuild the migrations a few times. Once we reach release, this won’t be as much of an issue.

To make the migrations, simply open up a console and type:

Like any other class, I am simply going to use dependency injection to include the required objects for my sample data (I’m creating data in my context and creating sample users in ASP.NET Identity).

The real magic here is in a method called InitializeDataAsync:

What is happening here is that I’m creating the users and visits. You’ll see later in the article why the CreateUsers needs to be async, but first creating the new visits is easy:

Once that is registered, I can just use parameter injection to add it to the configure method (note the new SampleDataInitializer parameter):

Now that database is being created and seeding, we can actually use the entities.

The Entity Framework code inside of my project is no different than older EF projects: