Since I do a lot of web development and teach web dev on the Microsoft platform, I spend a lot of time in tools that are node-based. If you don’t know already, gulp, grunt, webpack, etc. all use node to run themselves.

Because of this, Visual Studio tries to be a good guy and pre-installs Node with Visual Studio. When you use some of these tools in Visual Studio, they just work. No more having to tell dev’s to go install something to get them to work.

I’ve been working on a Vue with ASP.NET Core course and I’m up to introducing webpack to the project. It worked great from the command-line, but I wanted to be able to get it to run in Visual Studio to make life easier. So I found out that Mads Kristensen has created a great Webpack Task Runner to help webpack integrate into the Task Runner in Visual Studio.

After getting it, I was excited to see that Task Runner now just noticed my webpack and let’s me tie to different actions for webpack. Looked great: 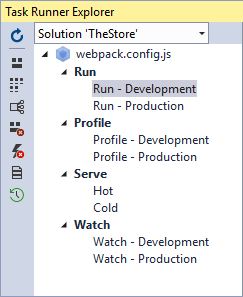 I went and filed a bug in Github and hoped someone would tell me what I’m doing wrong. I started to wonder if it had to do with an old version of Node itself. So I updated Node to version 10 on my machine but nothing changed.